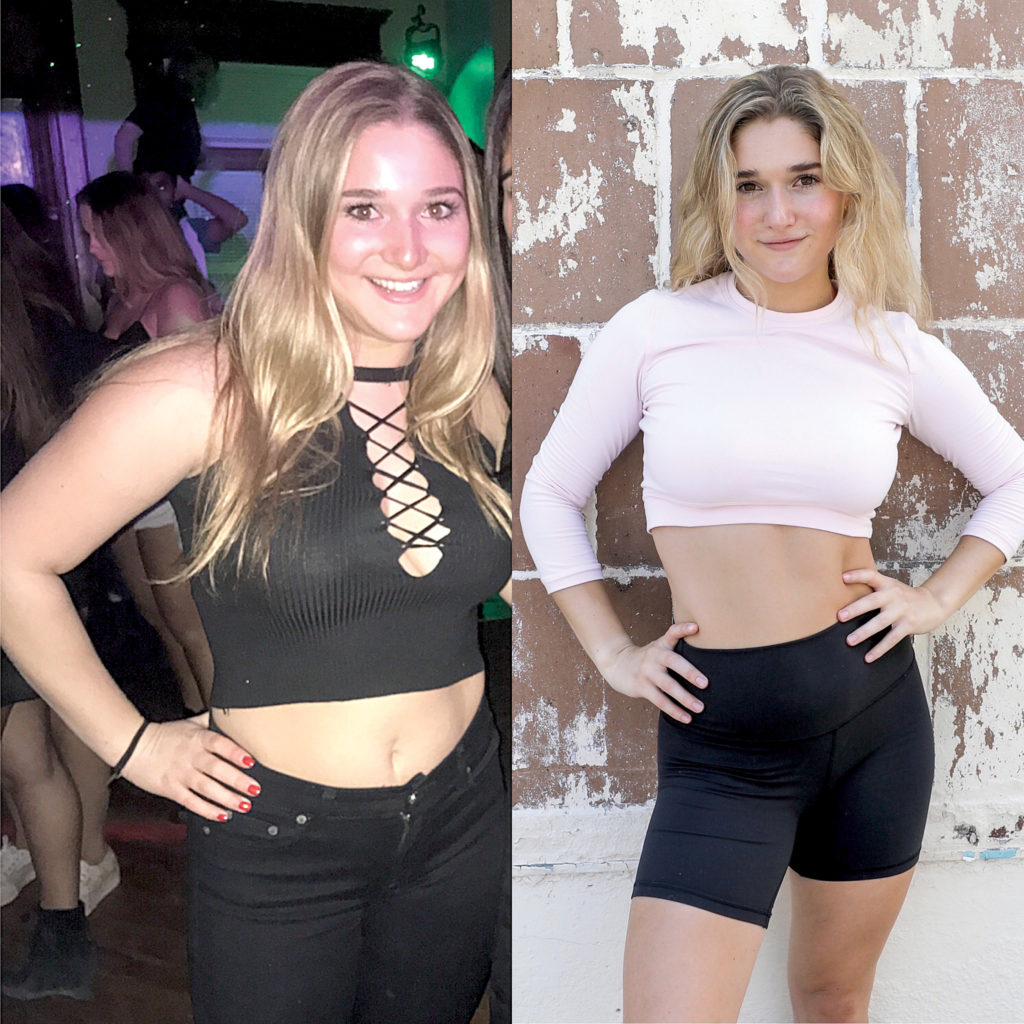 In college, Jordanna Drazin was unhappy with her physical and mental health. So the Rumson-Fair Haven alum and recent Syracuse graduate started an on-demand and live exercise video platform called “Schvitzcription” which she hopes will encourage young people to work out.

When Jordanna Drazin was a student at Syracuse University, she was, like many young women and men, struggling with her weight and her mental health. Dieting is a multibillion-dollar business and so ingrained in the culture that, when she began losing weight, everyone assumed she was following a popular weight-loss program or using diet products to achieve results.

“People were asking me for advice and they couldn’t get over the fact that I did it without cutting my calories or (by) not eating breakfast or intermittent fasting,” said Drazin, a 2016 graduate of Rumson-Fair Haven Regional High School.

So she created an Instagram account to make it clear she was following her instincts and working out to feel good, not to attain a certain body image.

Drazin’s message of body positivity on her account, The Daily Schvitz By Jordanna (@thedailyschvitz), resonates now more than ever. She calls out the diet culture and those promoting it for making people, especially young women, less healthy as they try to achieve an impossible perfection.

While majoring in communications, she completed an internship at Equinox, an American fitness company headquartered in New York. There she realized exercising and following a healthy lifestyle was a passion. When the pandemic hit and everyone went into lockdown, Drazin’s message of exercise for mental and physical health became even more important. She started holding workout classes outside for friends, then online via Zoom. She quickly realized scheduled classes weren’t sustainable since everyone had different schedules while working or taking classes virtually from home.

That’s when she decided to invest in her idea of an on-demand library of workout videos called Schvitzcription. She uploads new videos every week and currently has about 110 subscribers. She has nearly 6,000 followers on Instagram.

“It’s just been an awesome way to keep busy during my quarantine and help everyone enjoy fitness the way that it’s meant to be enjoyed, as something pleasurable rather than torture,” she said.

She credits her communications and advertising classes at Syracuse for helping her with the social media aspect of her new business. She is also studying to become a certified group fitness instructor which she expects to happen before the end of the year. She said she uses her background in dance, what she learned during her internship and the fitness tips she picked up along her own journey to create videos that are fun and accessible for everyone. For Drazin, the thought of spending 30 mindless minutes on an exercise machine just to burn calories doesn’t have nearly the overall health and well-being impact of 30 minutes being mindful of your body’s movement in a class that is designed to get the heart rate up and improve your mood.

Drazin chose the name for her account and workout platform after realizing she was disheartened by the post-workout photos people were posting on social media. “One thing that rubbed me the wrong way about many of the health influencers I was following at the time is that they were always posting pictures glowing after their workouts, hair and makeup perfectly intact,” Drazin said. “When I left workouts I always looked like a sweaty mess, drenched and red in the face! I wanted to normalize this and emphasize that sweat is something to be proud of and embrace because it shows you worked hard. ‘Schvitz’ is the Yiddish word for sweat and I’m Jewish, so I would constantly be saying ‘I’m schvitzing!’ after a hard workout,” she explained.

Drazin wants her subscribers schvitzing, but she doesn’t want them spending a lot of money to do it. The Schvitzcription on-demand library is available for $10 a month or $100 for a year; live classes are $5 a class, or $45 for a pack of 10. “I really wanted to make it as affordable as possible,” Drazin said, “because my main demographic really is college students, and I never want price to get in the way of someone feeling good about themselves.”

“I wanted it to be accessible for everyone to be able to feel their best, even if money is tight,” she said.

Her goal with Schvitzcription is “for people to feel their best and for me to help them get there,” Drazin said. She wants to inspire others and make them realize they don’t need to “beat up their body” in order to have a successful workout. “I would love to have thousands of subscribers and be able to maintain it as a full-time job,” she said. But for now, Drazin is happy anytime someone reaches out to tell her she’s helping them.

Drazin’s approach to eating is similar to her approached to fitness. She never counted calories or followed a low carb or keto diet, but instead focused on reminding herself that all foods are accessible. “Freshman and sophomore year I was struggling with binge eating,” she said, something she feels is prevalent on college campuses. She said it took time for her to get past the notion of denying yourself food out of fear of gaining weight. “Once you realize that that idea is sort of garbage, and it’s a societal construct, you know, you realize slowly that you can eat something and it’s not going to instantly make you gain weight or you can not eat something and you’re not going to lose the weight in five seconds. It took a lot of awareness and a lot of practice and a lot of effort and mindfulness.”

She knows in the time of instant gratification this message is difficult to embrace, but said once you practice it, it gets easier. “But it’s certainly not an overnight fix,” she acknowledged. She no longer categorizes food as “good” or “bad” and does not subscribe to the “all or nothing” mindset. In a recent Instagram post accompanying a photo of highly appealing chocolate chip pancakes, she said diet culture and food restricting “ends up being way more unhealthy for you in the long run than some… delicious pancakes.”

If Drazin were to offer one piece of advice to those wanting to start exercising or losing weight, she said it is to “remember that health is not about looking a certain way, it’s about feeling your best.

“Don’t be intimidated by all these people that claim health and fitness is one certain look. It is more about doing something that is going to make you feel good in your own body.”

The article originally appeared in the October 15 – 21, 2020 print edition of The Two River Times.