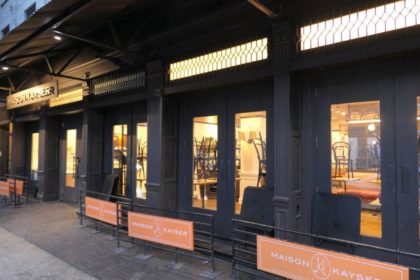 It takes a lot of gumption to open a restaurant in this climate, but if you can do it anywhere, it is here in Tribeca and in one of the prettier spaces in the neighborhood. Patisserie Chanson, which has its one and only other outlet in Flatiron, is opening in the former Harrison space at 355 Greenwich, of course more recently the Maison Kayser space, which closed its doors here last September. (I say this with some confidence since I knew there was a bakery coming and since a Chanson is on the agenda at CB1, . From Chanson: “It’s the same Chanson, correct, but we’ll be running different concepts.”)

The Infatuation puts it on its dessert list, right after Maman, saying: “Unless you’re living with a French pastry chef (if this is the case, well done), you probably won’t be able to make anything that even closely resembles the desserts at Patisserie Chanson in Flatiron.”

And Eater put it on a list of 15 essential New York bakeries: “Rory MacDonald spent time in the kitchens at Spain’s Restaurant Arzak and London’s Pearl before moving to the U.S. This, his first solo venture, is a European bakery that also happens to serve a dessert tasting menu. Go for the baked goods: Cranberry walnut loaves, hazelnut kouign amann, tall croissants, eclairs, and British-style scones all stand out.”

And their dessert bar, which they opened in the basement in 2017, got a lot of attention, including some from the Times.